Celebrate 45 years with us

to all volunteers and staff over the 45 years who contributed to the success of the gallery and made it what it is today. Thank you to all of our Members for your ongoing support, and all artists and art lovers who support us in many ways.
Wander Into the World of Norval Morrisseau
October 4 - October 26, 2019
Admission:
$12 for Adult, $8 for Senior and Student, Children under 12 and AGA Members are free.
​Art Gallery of Algoma in partnership with the Algoma Fall Festival is presenting a unique opportunity to view paintings of Norval Morrisseau in additional dimensions. Visitors will be immersed in large scale animated projections of Morrisseau's paintings that depict world of nature, spirits, shamans and animals.
Thank you all for the florists, artists, and supporters!
​Algoma Discovered
Celebration of 100th Anniversary of the First Painting Trip to Algoma by the Group of Seven
Group of Seven Exhibition
October 4 - November 10, 2018
Art in Bloom 2018
​​March 10 - September 22, 2018

Art in Bloom has been a popular event at many art galleries and museums across North America for many years. The AGA is presenting this exhibition and event for the third time. It grew in popularity in our community and became an appropriate event to mark and celebrate the arrival of spring. We hope to see even more participants this year.
The artworks for this exhibition were selected from Gallery’s permanent collection based on the use of colour and shapes, some more obvious, some challenging, some more inspiring choices – all to be an inspiration for floral creations. Local florists, artists and enthusiasts are invited to create a floral arrangement in response to a painting of their choice in the exhibition.
There will be a dinner event on April 27th at 6 PM. Please join us for the event and vote for the arrangement you think is the best. The winner will receive a People’s Choice Trophy at the event.
This year the dinner will be delicious Indian cuisine prepared by Neeta Marwah the owner of Rasoi the Indian Kitchen – a newly opened restaurant on Queen Street in the downtown area. Neeta’s support of the Gallery over the years is greatly appreciated. Her delicious food was always a great hit at several previous events hosted by the AGA so we know that it will be again a fabulous display of colour, smells and taste!
Art in Bloom 2017
March 18 – May 29, 2017
Opening Night: Friday, April 28 at 5:30pm
“The Art Gallery of Algoma would like to thank all sponsors and participants for the Art in Bloom 2017.”
Winter Festival of Art 2017
Time to be Inspired...

Exhibition dates: February 3 to March 4, 2017
Opening reception: Friday February 3 at 7pm
Winter is the time of darkness and introspective that enables us - or forces us - to be more inspired and creative. The exhibition is a reflection of our northern community which is also in a process of change on many levels from economic to demographic and everything in-between. Art is a reflection of every community so this Festival is an opportunity to express multiple levels of the richness in the community and celebrate the potential we have to move forward through artistic and creative expression. The artwork in this exhibition can express any aspect of a society that is a personal reflection of the place we call home. Art is always a creative force looking forward and instigating the change. Be Inspired! This year the Winter Festival will be during Bon Soo Winter Carnival. Another reason to celebrate and have fun!

Celebrate art ~ an important component of every community!
From table-top assemblages, to the totemic stackings of Still Dances, to planar suspension of Mutable Selves, to the architecturally engaged Rocksbreath series, the artist has pushed the medium of clay into a diversity of manifestations.  There is a meditative, spiritual quality to Low-Beer’s human figures that are often genderless and unclothed, but marked by ornate patterns that reference diverse cultures.  Many of the figures are composed of fragments of other figures, other bodies, amalgamated into a new whole. The show culminates with a new installation of figures that are suspended, defying gravity, finally free of weight and restriction. The body is a vessel for the spirit and the breath; Low-Beer presents works that prompt a heightened awareness of humanity and a shared perspective on this mortal coil.

Co-curated by Jasmina Jovanovic of the Art Gallery of Algoma and Stuart Reid, this exhibition brings together seminal works by Low-Beer borrowed from private and public collections across Canada.  The show provides context for major works included in the Art Gallery of Algoma collection. Embodiment will tour in Canada and will be accompanied by a forthcoming publication in both languages documenting this important body of work. This project is generously funded through Department of Canadian Heritage, Museum Assistance Program. 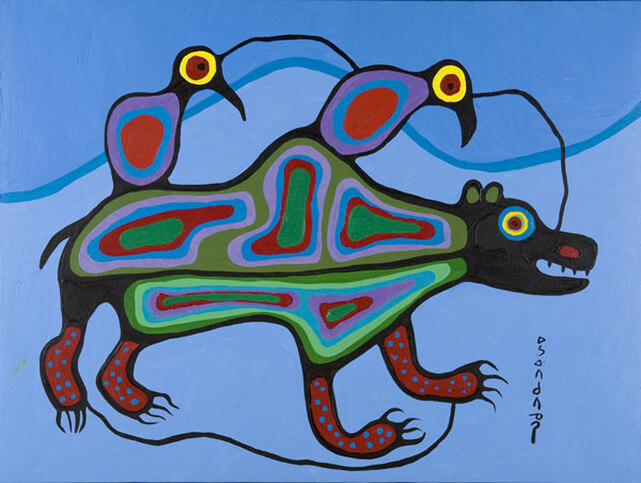 Artists in the exhibition:


This exhibition is presenting artwork from the gallery’s permanent collection, as well as art by contemporary Indigenous artists currently living and practising in the area. The idea of the exhibition is to show that some of the same issues artists have been dealing with for the last several decades are still current and present today and that the spirit of Aboriginal culture is alive and integral part of this region.

Until the 1960s, the prevailing opinion was that Indigenous art depicted a dying culture, dealt with old legends, was not contemporary or relevant to current issues and therefore was seen as belonging to the ethnographic field rather than the art field. Most discussions surrounding Indigenous art was a question of whether it was actual art or craft, and whether it should therefore be presented in mainstream art galleries.

Indigenous art in Canada started to be recognized as art in the 1960s and 1970s. At that time, Canada was also facing political changes: in 1960, Aboriginal Canadians got the right to vote and became equal within the Canadian political system.

There were several exhibitions in the 1960s and 1970s that made an impact and placed the art on a different level:

Expo 67 saw ten Indigenous artists participating as a way of recognizing their contribution to the Canadian cultural scene.

In 1967, the Vancouver Art Gallery presented the exhibition “Arts of the Raven: masterworks by the Northwest Coast Indian art; for celebration of the 100 Anniversary of Canadian Confederation.”

In 1972, the Winnipeg Art Gallery presented the exhibition “Treaty Numbers 23, 287 and 1171: Three Indian Painters of the Prairies”. The exhibition was of several Indigenous artists, which was a huge step in recognizing their art as part of mainstream art in Canada. Winnipeg was, and still is, an important city for the development of Indigenous art.

The artists in the Group included:


The group opened a gallery in Winnipeg in order to have better control of making and marketing their art. This was a hugely important time in the development of and for the future of Indigenous art in Canada.

At this time, during the 1960s and 1970s, the Woodland School was being born. This is a very pictographic style of painting and is full of symbolic meaning, which is part of the fabric of the culture. It includes spirits, heroes, animals and natural elements. It remains alive and is practised to this day – a contemporary example of this style in the exhibition is painting by John Laford, a local artist, born on Manitoulin Island, currently living and practicing in Sault Ste. Marie. Two other wonderful examples of Woodland School in this exhibition are by Jackson Beardy and Norval Morrisseau.

Since the 1970s, art has changed and a new generation of artists emerged on the Canadian art scene practising various techniques and styles. There are several examples of their work in this exhibition.
Art in Bloom 2016
Opening April 23, 2016

With this event the Art Gallery of Algoma (AGA) is celebrating the arrival of spring and honouring Earth Day. The AGA is presenting this event for the first time hoping that it will become an annual event.

Art in Bloom is a popular event at many art galleries and museum across North America. It has been presented annually for many years. The event will involves display of art works from our beautiful and significant permanent collection and display of floral arrangements created by local florists and enthusiasts in response to a particular painting in the exhibition. The artwork for this exhibition was selected based on the use of colour and shapes, some more obvious, some challenging or more inspiring choices s inspiration for floral creations. 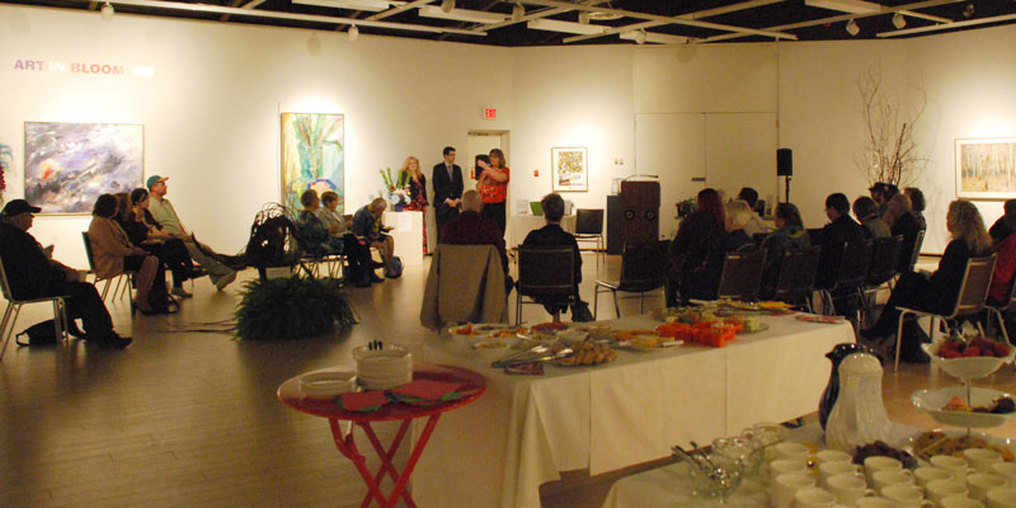 The Art  Gallery of Algoma would like to thank all participants and supporters of the Art in Bloom 2016:

Our sincere gratitude for their tireless effort to make this event a success goes to Co-Chairs of the event and members of the AGA Board Neeta Marwah and Hilda Odom.

The GAA appreciates contribution from the AGA staff that made the exhibition and the event possible.

This event and floral displays are celebrating talent in our community. The AGA will continue to support and inspire our community and provide opportunities for creative and artistic expressions in Sault Ste. Marie and Algoma.

Once again, thank you to everyone who contributed to the success of the very first Art in Bloom in Sault Ste. Marie. Enjoy the colours and fragrances of beautiful floral arrangements and beautiful paintings from the AGA collection.

We look forward to hosting the exhibition and the event next spring.

This is a retrospective exhibition of well-known Ontario artist George Raab. Raab gained international reputation for his landscape etchings. He has exhibited world-wide in group or solo exhibitions. He lives and works in Millbrook, Ontario.
This exhibition is organized and toured by the Art gallery of Peterborough.
The AGA's collection houses not only important pieces such as William Armstrong's historical watercolours of the Sault area in the late 19th Century, but more contemporary works by artists including Marcel Barbeau, Joseph Drapell, Paul Fournier, Norval Morrisseau, Jean McEwen, Ray Mead, Tom Hodgson, Barbara Hepworth, David Bierk, Rosalie Favell, Jackson Beardy, Jack Bush, William Ronald, Rita Letendre, John Hartman, Aganetha Dyck, accomplished local artists Ken Danby, Ken MacDougall, Zoltan Szabo, Robert-Ralph Carmichael, and of course works by members of the iconic Group of Seven. AJ Casson, one of the afore mentioned group, actually cut the ribbon of the building at the gallery's present site on East Street in 1980. These artists and more are included in the exhibition 40 Years of Collecting in two exhibition spaces – Main Gallery and Education Gallery.