Riley Greco: Within Me
​
April 2022
Riley Greco is a young emerging artist based in Northern Ontario. In this body of work as a young woman and artist, Greco is depicting her inner world and her contemplations of life. 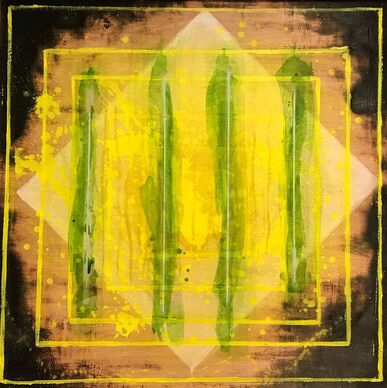 "Overwhelming responsibilities and the pressures of society have caused an imbalance within me, effectively dismantling my well-being. By processing the ways in which I’m affected by external factors and my emotions, I can establish my connection to self and regain a healthy balance. I have given myself permission to feel what I feel, and be where I am, without intimidation or fear. The resulting paintings are raw, truthful, and a representation of my full human experience, felt through specific colour combinations and arrangements of line and space."

In spite of the heaviness of thoughts, which inspired this work, Greco is using vibrant colours and movement, giving us hope for healing, and continuous optimism, stating that life is amazingly exciting in all its forms and shapes. We hope that this exhibition will evoke sense of contemplation, exploration, and new perspectives for the viewers too. ​
Reflections
AGA Permanent Collection
​May 19, 2018 - September 23, 2018
Collection Highlights
AGA Permanent Collection
​January 12, 2018 - May 18, 2018
AGA Bondar Challenge Exhibition
December 7, 2017 - January 6, 2018
61st Northern Ontario Art Association Annual Juried Exhibition
November 25, 2017 - December 2, 2017
Opening Reception November 25, 2017 at 2pm ​
Traditions and Stories – AGA Permanent Collection
March 21 – May 23, 2017
This work is posing many questions – is water as source of life sustainable, how long are we going to exploit it, is it going to permanently change human body as a result. What is the legacy today’s world is bequeathing to the future generations? All these questions have multifaceted answers, opening a discussion on a broader level as well as on a personal level. This work is simply pointing out some thoughts and questions for us to consider.

In this exhibition there are some examples of art by artists spanning from the 19th century to contemporary, depicting the ever-lasting subject of water in its various forms, colours, and states – from snow to rain storms to the calmness of lakes, to rapids, rivers, and oceans – all of them in their glory and splendor.

Early images from the 19th and early 20th century showing scenes from around Sault Ste. Marie as seen by a couple of artists who were following expeditions that came through the area at that time, on their way to the west. They left us a legacy and a record of how this area looked during this time. This area, being on the water, surrounded by Great Lakes, with its untouched nature and a number of smaller lakes, rivers and streams has been a gold mine of inspiration for artists from all times. It continues to be so to this day.

Renowned Canadian artists, Group of Seven, found their source of inspiration on the shore of Lake Superior and in Algoma. The Group was formed during the time they visited Algoma. They came back time and again. There are a few examples of their work in the exhibition, by three artists – Jackson, MacDonald and Casson. Each of these artists came to this area many times over the years and left artworks that will forever be parts of the Canadian cultural heritage in the eyes of Canadians and the world alike.

Artists Ken Danby and Zoltan Szabo spent some time in this area as well and also found inspiration in water. Shimmering light on the water in works by Danby are immaculately portrayed in two works in the exhibition.

Harold Feist depicts water in the work Ocean, as an explosion of movement, force and colour. Contemporary artist, from the Algoma region, Valerie Palmer, sees and depicts water as a place of solitude and calmness, almost isolation. In her painting, Icarus, figures are not interacting, they are solemnly taking in their surroundings completely absorbed in their thoughts.

John Hartman, a contemporary artist from Ontario, depicts water in most of his art. He adds another element to it: cities. Unlike the other artists who are depicting untouched nature and beauty, Hartman is inspired by human developments on the bodies of water. During Hartman’s stay in Sault Ste. Marie, as artist-in-residence in May 2012, he painted a number of studies and a Legacy Painting of Sault Ste. Marie. These are great examples of Hartman’s work. The colours in his study of Sault Ste. Marie are depict the power of water, its force and splendour. The legacy Painting, acquired with generous support from Canadian Heritage, is on display in the Gallery Lobby at all times, welcoming our visitors to the AGA, to the Sault and to the shores of Lake Superior.